Also recommended by Bill Gates, as reviewed on his blog.

A Gentleman in Moscow  is a very gentle, comforting story for the earnest reader in a sea of frivolous compartmentalized modern literature.

It seems almost a miracle that the premise of a man spending decades in a hotel can lead to a fulfilling story of almost 500 pages. It is not an action-packed thriller, granted. The story, rather, is character driven, and thus unfolds in the well-mannered style of Count Rostov. I appreciated and enjoyed the witty humor as well as the deeper reflective passages. All in all a delicacy. 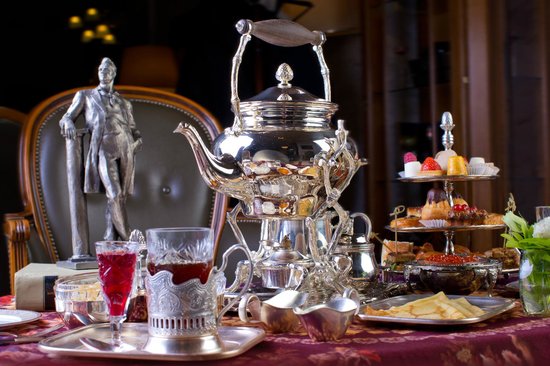 This photo of Hotel Metropol Moscow is courtesy of TripAdvisor

The most evocative moment for me was at the very beginning, when the Count, having just found himself with changed circumstances, visits his old suite and sees the abandoned setting for the afternoon tea. This one small detail summarizes for him the end of a life of idle hours and his rise as a Man of Purpose – an adequate transformation in the context of the new regime.

Throughout the book, the Metropol hotel becomes at the same time a minimized model of the new world – jobs and positions are given out to well-connected Party members, foreign journalists are at different times welcomed or not, eavesdropped on and an audience to be impressed with new Soviet achievements, American diplomats are trying to get intel on the Soviet superpower; and the last bastion of the old one – exquisite dining and immaculate manners suffer only superficial bruises (in temporarily serving wine without labels and scratching orders on notepads) before becoming as integral to the new ruling elite, as they were to the old aristocracy.

I find the novel misses its mark in only two regards.

Firstly, this was yet another instance of a book, where I got bogged down at 80%. A modern fault of books is the unbalanced ratio between story set up and story resolution (and the lack of anything in between).

Secondly, I couldn’t help but feel the soul of the book was decisively non-Russian (and I don’t mean just factual discrepancies like using Fahrenheit instead of Celsius, which for some reason annoyed me a lot).